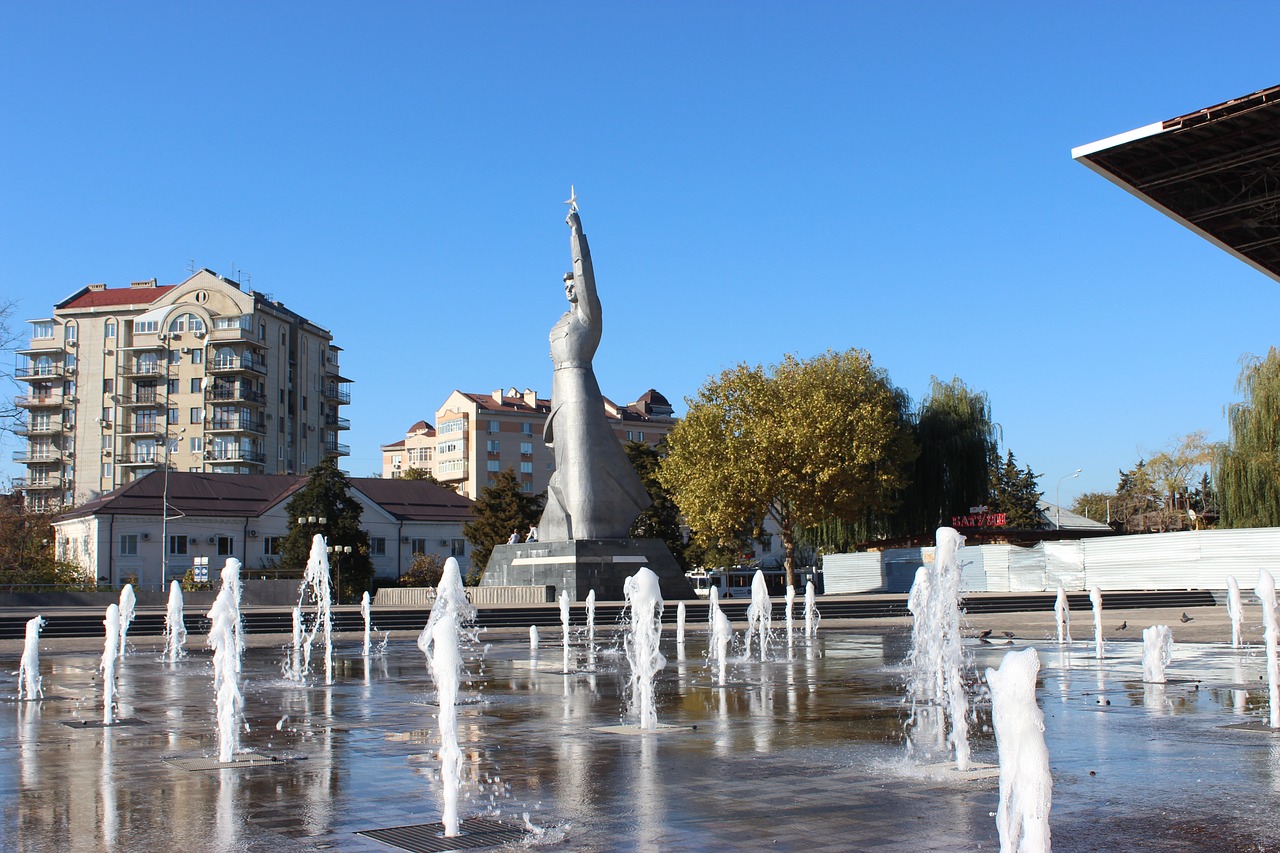 Krasnodar was founded in 1793 by Black Sea Cossacks, originally as a military camp and later as a fortress. Its historical name, Yekatrinodar, the city received in honor of the gift of the Kuban lands to the Cossacks by Empress Catherine II. It was necessary to celebrate such an impressive historical fact with something other than fireworks or a festive table.
Today, Krasnodar is a large modern city, where you can still immerse yourself in the 19th century, around Kommunarov Street. The city remains a modern and dynamic place to relax and have a good time. On summer weekends, Red Street turns into a pedestrian paradise, where lovers stroll, mothers and children meet, and grandmothers gather to share the latest and most important news. They are accompanied by street musicians, cafes, bars, karaoke and clothing stores waiting for their customers - the youth of Krasnodar.

But more seriously, Krasnodar is one of the most important historical and cultural centers of southern Russia and the North Caucasus region. This city has defended the borders of our homeland against foreign invaders from the sea, in its vicinity bloody battles between white generals and red guards took place in the beginning of the 20th century. Here, even today, the peoples of the Caucasus, the Cossacks and all those who are not too lazy to fight for power in one of the most beautiful and interesting cities of Russia, share their spheres of influence.

The average tourist will hardly leave the central district of Krasnodar - there are no attractions, hotels, or any important infrastructure. (Unless you count the district of Pashkovsky where the airport of the same name is located. But from there, everyone leaves, as soon as they arrive, which is quite understandable).

The other districts of the city - Prikubansky, Zapadny and Karasunsky - are so complicated and confused in the distribution of districts and borders that even ordinary residents of Krasnodar do not try to understand them. Moreover, they call these districts by historically established abbreviations that an unfortunate traveler would do better not to know - KSK, FMR, GMR, RMZ and others. What you need to know for sure: the center of the city stretches 5 km from north to south along Krasnaya Street. It is a kind of city axis, around which the neighborhoods, districts, places of interest and in general the whole life of Krasnodar are organized. Just a few steps from Krasnaya Street there are important historical buildings, pompous "Stalinist" houses, hotels and restaurants.

Hotels in Krasnodar are not a problem if you take care to book in advance. But you should not expect a wide choice of hotels as, for example, in Sochi. Most of the time, business travelers or beachgoers in transit come to the city to stay for one or two days and rush to the sea. Therefore, a large part of the hotels are mid-range "three luxury" hotels, which somehow get their customers. Cost of accommodation depending on the season - 1500-2500 rbl. The closer to the center, the higher the price.

Those who have an early flight are better off staying closer to the airport: traffic jams in Krasnodar are common, so you can save time and money and find a room for about 1000-1500 RUR, closer to the platform. Of course, there are also business class or luxury hotels in Krasnodar, where you will pay 5000RUB per night.

Book popular hotels in Krasnodar at the best price

There is no metro in Krasnodar, but there is an abundance of trolleybuses and buses, streetcars and marshrutkas are also popular. Streetcars and buses cost 24RUB and there are also public transport cards that can be topped up with any amount. There are no major roads in Krasnodar apart from those to the airport: many of them, in one way or another, pass through the center and can be useful for tourists. If you want to avoid wasting time getting familiar with public transport, you can take a cab - there are many transport companies in the city. The average price of a cab ride in Krasnodar is 300-500 rubles. The prices listed on the page are for November 2018.

Steamboats are an important means of tourist transportation. After all, the city is located on the banks of the beautiful Kuban River, although it is not used for passenger transport: there are no regular flights, only pleasure flights and short cruises in season. The cost of a one-hour ride varies from 400 RUB.

The car rental market in Krasnodar is represented by dozens of companies, the leading positions of which are occupied by Hertz, Avis, "Avtodar", etc. There are companies even at the airport. On average, the cost of renting varies from 1200 to 1800 rubles per day, depending on the duration of the rental and the class of the car.

Now to the unpleasant things: there are serious traffic jams at peak times and parking difficulties, so taking a car to explore the city is not the best idea. But to arrive and drive it to the sea - a lot. On the coast, during the season, there may be a shortage of rental cars, and the prices are a little higher than in Krasnodar.

Tomatoes, tea, fish, sunflower seeds, carnelian, churchela, lard, wine, honey - almost everything can be brought from Krasnodar, and in 9 cases out of 10, it will be tastier than in your own city. Having hardly deviated from the theme of food, it is worth paying attention to the souvenir stores. Their assortment is standard: Cossack paraphernalia, indispensable hats, Cossack dolls and Cossack girls. In specialty stores and pharmacies you can find local mineral water and temryuk clay, which is very useful.

What brands of wine from the Krasnodar region should I buy?

Cafes and restaurants in Krasnodar

Krasnodar is the capital of the region, so it is not surprising that there are all kinds of cafes, restaurants and pizzerias for all tastes and budgets. In the city, it is more difficult to stay hungry than not to find exotic cuisine.

Closer to the center, on Krasnaya Street, the number of establishments per square meter increases exponentially, but there is also a nice pub on the outskirts. The best restaurants are in posh hotels where a three-course dinner can "cost a pretty penny": from 3000 RUB. You can also have a cheap snack in one of the fast food restaurants or a pizzeria (300-500 RUR). Of course, it is also worth visiting one of the South Russian, Georgian, Armenian or Greek restaurants which are a regional specialty. I must say that this is an exceptionally tasty "thing".

The capital of the Kuban and Cossack regions - Krasnodar - can be called a resort town without hesitation, even if it is not located on the sea. But everything is ready for a relaxed, serene and colorful relaxation. First of all, the abundance of greenery and the amazing southern architecture. It is not without reason that at the beginning of the last century Krasnodar was called "Little Paris". The main historical buildings, pleasing to the eye with their openwork architecture, are concentrated in the center of the city, around the Red Street. These include the majestic St. Catherine's Cathedral, the fanciful "green house" of the post office and the splendid building of the art museum. They are complemented by the monuments of the city, such as Catherine II, who gave the Cossacks a whole city. There is also the memorial "Cossacks of Zaporozhye write a letter to the Turkish Sultan", which is located at the intersection of Red and Gorky streets. Among the unique monuments of the city is a hyperboloidal openwork steel construction - a water tower, built on the design of Vladimir Shukhov. This engineering marvel is located near the circus building, at the intersection of Golovatogo and Rashpilevskaya streets.

Warmth and comfort give the appearance of the Krasnodar embankment on the Kuban River, the famous "kissing bridge" and picturesque parks. It is not only a pleasure to walk the children and enjoy the blessed shade in the afternoon heat, but also to simply enjoy the southern life - measured, noisy, but so sunny and cheerful.

The colorful musical fountain of Krasnodar is a new symbol of the city. It is a fantastic play of different shaped jets, glittering in the sun's splashes, a fairyland of colors and melodies.

There are not many museums in the city, but each of them deserves its own page of history. The museum houses the Krasnodar Regional Art Museum, which is famous throughout Russia. Following it is the Krasnodar Regional Exhibition Hall of Fine Arts, where you can admire the works of the great Russian artists of the 16-20 centuries. The city's Literary Museum is also worth a visit. It opened not so long ago, but it has already won the favor of the city's residents. Children should not be turned away from the Museum of Military Machines or the Museum of Bodybuilding, where you can not only learn a lot about the development of physical culture and bodybuilding, but also test your strength. The Cossack museum and the house of Ataman Bursak deserve a special mention, because, after all, Ekaterinodar is the capital of these glorious and brave warriors.

What to see in three days in Krasnodar

Krasnodar - an ideal place to stay with children: there is an abundance of cafes with children's menus and even separate rooms for children, many hotels offer cribs, and a comfortable climate and an abundance of exciting places for excursions will bring back to reality even the biggest fan of telephone games. The best place to start is with outdoor walks. Fortunately, there are many parks in the city. For example, "Sunny Island", which offers attractions, cafes, a planetarium and even a real safari park. The City Garden (or Gorky Park) has wide tree-lined avenues and another corner with attractions for children.

In Chistyakovskaya Grove, parents will remember their youth in the "Wedding Alley", and children will let their energy run wild in the "Rope Park". Finally, in the park of culture and rest named. It is worth going there just for its open-air museum of military equipment.

It would be unforgivable not to take your child to one of the city's water parks - "Equator" or "Aqualand". And as a final touch to watch in the evening with the whole family to color the musical fountain on the theater square. Not enough? Welcome to the ostrich farm on the outskirts of the city, or in the unspeakable atmosphere of Cossack vacations in the real villages.

The climate in Krasnodar is moderate. Here the winter is mild and short, lasting from early January to mid-February, and snow is almost completely absent. On the contrary, the summer is hot and long, and it starts from the beginning of May and lasts until the beginning of October. May and June are considered the wettest months - stock up on umbrellas and be prepared for the heavy, humid air.