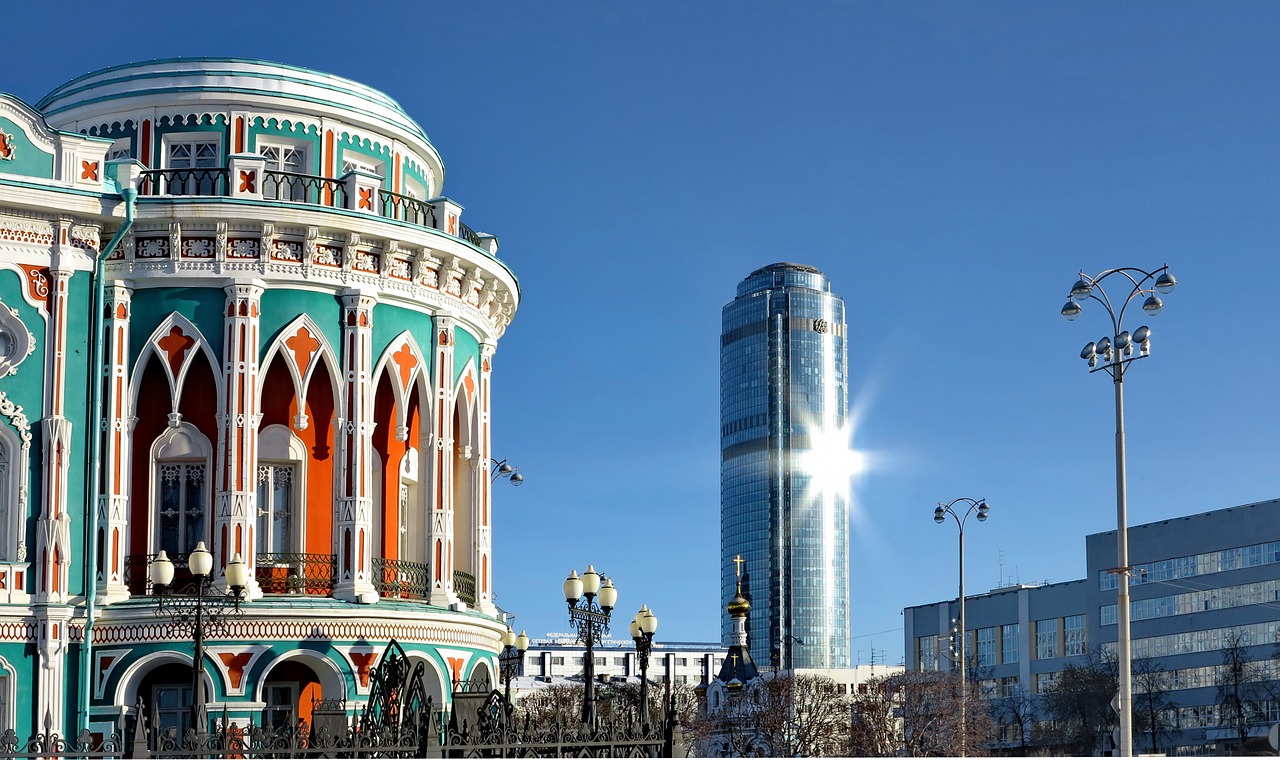 Ekaterinburg is the largest city on the land border of Europe and Asia. According to statistics, the border of some parts of the world passing through Ekaterinburg crosses 78 trains every hour. Its unique geographical location, seventeen kilometers from the center of Ekaterinburg, makes it one of the most visited places in the city.

? Ekaterinburg is the most compact city in the country, with one million inhabitants. In Russia, among the cities with more than one million inhabitants, there is no other megalopolis as neat and well built as Ekaterinburg. The Ekaterinburg agglomeration extends 20 kilometers from north to south and 15 kilometers from west to east. The Ekaterinburg subway journey from the northern terminus of "Prospekt Kosmonavtov" station to the southern terminus of "Botanicheskaya" station takes only 19 minutes.

In 2002, the UNESCO Committee recognized Ekaterinburg as one of the twelve ideal cities of the world.

The lands of the Urals, where Ekaterinburg is located, were known to the ancient Greeks. In his time he wrote about the fantastic riches of the Urals land, its mysterious power and the miraculous mythological creatures that inhabit it.

In Ekaterinburg there is the oldest wooden sculpture in the world - the great idol Shigir. It is older than the Egyptian pyramids, its age is 9,500 years. Radiocarbon analysis of fragments of the idol, found on the outskirts of the city, gave a sensational result: it was made by stone tools in the Mesolithic period, in the 8th millennium BC.

In Ekaterinburg is preserved the unique Kaslinsky Iron Pavilion, created by the masters of the Urals, which won the Grand Prix and a gold medal at the Paris World's Fair in 1900. Each of the 25 Urals workers who assembled the pavilion at the exhibition received a silver watch in Paris as a reward for their art. The pavilion consists of more than 1,500 unique cast iron pieces and sculptures and weighs about 20 tons. In 1978, the pavilion was registered by UNESCO as a rarity, the only architectural cast iron structure in the world that is part of the museum's collection.

The products of Ekaterinburg's metallurgical plants have been used in the creation of the most famous architectural structures and constructions all over the world. The first industrial machines in England were made precisely from iron from the Urals. In 1820, the roof of the British Parliament building in London was made of roof iron manufactured in Ekaterinburg. Urals steel was used for the construction of the Eiffel Tower in Paris, and Urals copper - for the construction of the Statue of Liberty in New York.

Ekaterinburg was the first city in Russia to find and start mining gold ore. From 1745 to 1922, 559 tons of placer and 145 tons of native gold were mined - about one third of the total balance of Russia. But the importance of this Urals metal is difficult to overestimate: it is the first Russian gold. Here the technologies of prospecting of hard rock and placer deposits, technologies of processing of ores from gold-containing sands have been perfected and gold mining machines have been designed. In short, the importance of the Urals gold - historical, geological and technological - is exceptionally great.

In the 18th century up to 80% of the copper coins of the Russian Empire were produced by the Ekaterinburg Mint. For almost two centuries the entire population of this vast country paid for its purchases every day in Ural five-cent coins.

The first bicycle, similar to the current models, was invented in Ekaterinburg. The peasant Yefim Artamonov built a model, not much different from the modern ones, and in 1801 he took it to the coronation ceremony of Emperor Alexander I in St. Petersburg. A similar two-wheeled "running machine" with pedals only appeared in Europe in 1839.

The world's first jet plane, the BI-1, was tested in Ekaterinburg. On May 15, 1942, the BI-1 under the control of test pilot Grigory Yakovlevich Bakhchivandzhi took off for the first time using a rocket engine. The flight lasted 3 minutes and 9 seconds at an altitude of 840 meters.

Ekaterinburg, as well as the whole Urals, has the most direct relationship with the opening of the space age of mankind. In Ekaterinburg was invented the transmitter, allowing to receive signals from the satellite to the Earth.

The most famous walking excavator in the world, listed in the Guinness Book of Records, was manufactured in Ekaterinburg. The length of the boom of a giant model ESH 100.100, which was produced in the famous "Uralmash" factory in 1980, is 100 meters. The bucket of this excavator can load two railcars at a time.

During the Great Patriotic War, Sverdlovsk was the radio broadcasting center of the USSR - the most powerful radio transmitter in the country was located here and in 1941, Yuri Levitan moved to the Sverdlovsk radio studio under conditions of absolute secrecy, which received information by telephone from Sovinformbyro of Moscow. Thus, Levitan's famous words "Beware, Moscow is speaking" actually resounded from Sverdlovsk.

During the Great Patriotic War, Sverdlovsk was the radio broadcasting center of the USSR - the most powerful radio transmitter in the country was located here, and in 1941 Yuri Levitan moved to the Sverdlovsk radio studio in conditions of utmost secrecy, which received information from the Moscow Sovinformbyro by telephone. Thus, Levitan's famous words "Beware, Moscow is speaking" actually resounded from Sverdlovsk.

? Since 1943, the Sverdlovsk Film Studio - the only one in Russia outside Moscow and St. Petersburg, which not only makes documentaries, but also feature films - has been operating in the city.

During the Great Patriotic War, the collections of the State Hermitage were stored in Sverdlovsk, as well as the Chekhov Moscow Art Theater and the Central Theater of the Soviet Army were evacuated.

One million citizens of Yekaterinburg were born on January 23, 1967.

In 1973, the city was awarded the Order of Lenin "for scientific work and achievements, as well as for the contribution of the city's inhabitants to the defeat of the Nazi invaders".

In 1979, the city was included in the list of historical cities of Russia.

Ekaterinburg received the visit of 35 heads of state, from the visit of Emperor Alexander I in 1824 to the SCO and BRIC summits with 13 presidents, held on 15-16 June 2009.

? In 1963, when Fidel Castro visited the capital of the Urals, the city's registry office registered eleven newborns with Fidel's name.

Ekaterinburg is the third largest city in the country (after Moscow and St. Petersburg) in terms of the number of diplomatic missions, whose consular districts extend far beyond the Sverdlovsk region and serve other regions of the Urals, Siberia and the Volga region. The city has many foreign relations. Cultural days of other cities and countries are periodically organized in the capital of the Urals. By 2013 Ekaterinburg will have 13 partner cities. Today the city actively cooperates with many cities in the cultural, scientific and industrial fields. It should be noted, for example, that the logo of the NHL club, the San Jose Sharks, of its twin city was designed by Anatoly Paseka, an artist from Ekaterinburg. Experts in Genoa, Italy, are implementing a special "intelligent" traffic light control system on the streets of Ekaterinburg to rid the city of traffic jams.

Ekaterinburg is one of Russia's leading sports centers. The city is associated with a large number of famous athletes, world champions and Olympians. Since 1952, Ekaterinburg athletes have won 145 medals (50 gold, 60 silver and 35 bronze) at the Olympic Games.

? The first official national biathlon championship in which mainly cross-country skiers participated was held in Ekaterinburg on the Uktussky Mountains in 1957.

After hosting the final of the UEFA Mini Football Cup in 2009, Ekaterinburg became the easternmost city to host the finals of the competition under the UEFA umbrella for more than half a century of its history.

Ekaterinburg is one of the Russian cities that hosted the FIFA World Cup 2018™.

? Currently, Ekaterinburg is one of the main theatrical centers in Russia, there are 57 theaters in the city, most of them are popular not only in Russia but also abroad. The buildings of many theaters (e.g. opera and ballet theater) are architectural monuments.

? The organ of the Sverdlovsk State Academic Philharmonic Society in Ekaterinburg is considered to be one of the most important in Russia. It weighs 22 tons, consists of 3,840 pipes and 52 registers. The largest pipes weighing up to 180 kilograms reach 6 meters in height and 40 centimeters in diameter. The smallest ones do not exceed 15 centimeters in height and 1.5-2 mm in diameter. Thanks to its inimitable sound qualities, the organ can be used in various programs: solo, ensembles with singers and instrumentalists, symphony and chamber orchestras, choir.

? Ekaterinburg became the first Russian city to have an official representation of the Internet zone in Cyrillic.

? Two of the northernmost skyscrapers in the world are in Ekaterinburg. Residential tower "Iset" (209 m) and business center "Vysotsky" (188 m) are the tallest buildings not only in Ekaterinburg, but also in the whole country east of Moscow.