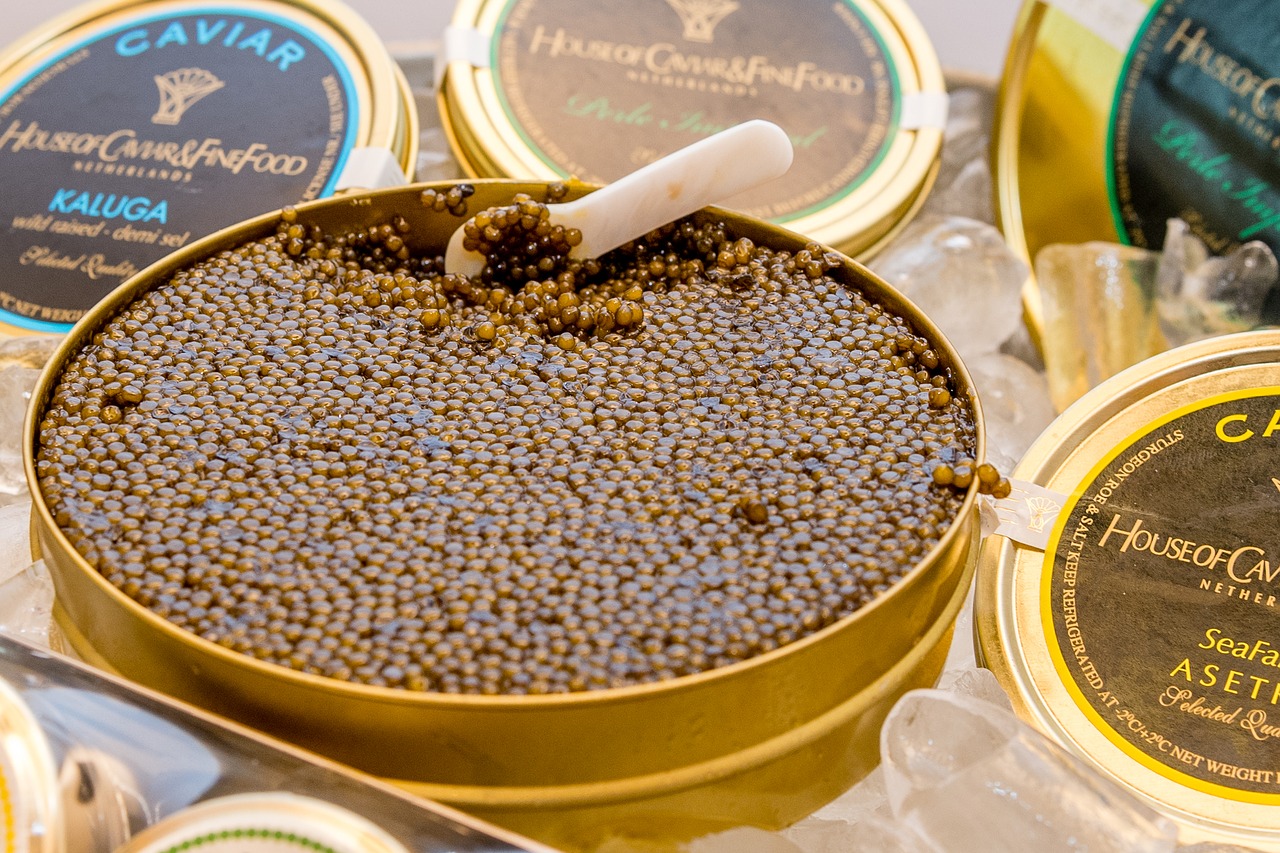 Thirty years ago, Astrakhan black caviar was produced by the ton, cost consumers a few cents, and was a trademark worldwide.

But now, for 50 grams of black caviar you have to pay several thousand rubles. The taste, most likely, will not be delicious. And quality is no longer the responsibility of Russian entrepreneurs, although the brand is sold to us as "a national production of the highest quality". Why is there so little caviar? It is 42 degrees below zero in the shade. It is a frightening heat. In summer in Astrakhan, there are hardly any tourists, the locals do not come out from under the air conditioners, which here are called splits. Fishermen come to Astrakhan in spring and autumn, it is during these periods that one can catch good fish.

Then there is also a flourishing trade of branded souvenirs: dried fish and black caviar. But if the fish is really caught by the inhabitants of Astrakhan, the origin of black caviar is questioned. - In the 80's, we caught 37 tons of fish per day. We used to catch about six tons of caviar per day. There were times when we didn't have time to process everything the fishermen sent us, so we discarded two or three tons, - said an experienced fisherman, Yuriy, in Laif. He now works on a farm that produces "A-Ikra" black caviar.

The commercial fishery has not been replenished: sturgeon, star sturgeon, beluga have been fished in the Volga River and the Caspian Sea basin, but the fry have not been stocked. In the 1990s, the number of poachers increased. In fact, local fishermen admit that in Astrakhan they sent people to jail for seven or eight years for illegal fishing and caviar production. There was even a saying: all caviar lovers stay in jail for seven years. Seven was the name of Colony No. 7. A few years later, environmental problems began: dumping dirty water, building dams, drilling oil wells in the Caspian Sea.

The sturgeon is a bottom-dwelling fish, it feeds on everything on the bottom. But all the mud that flows into the Volga and the Caspian ends up in the mud. The fish get sick. After a new discharge from the Volgograd, sturgeons walk on the Volga for 400 kilometers. It was scary to watch", says Yury. According to Vasily Sokolov, the deputy director of the Federal Fisheries Agency, millions of sturgeon fry are sent to the Volga every year. And the Russian Research Institute of Fisheries and Oceanography (VNIRO) and Rosrybolovstvo know the "biography" of each fish. If we catch a sturgeon in the Volga, the DNA will tell us which fish farm it comes from, who its "mother" and "father" are. After all, it takes at least six years for a sturgeon to spawn.

What does China have to do with this?

Black caviar is an expensive product, both for production (it is not so easy to feed fish until they first spawn) and for consumers, which is why it cannot be called a staple product. But there is a demand. According to various estimates, the production volume of caviar in Russia is about 50-60 tons per year. Rosrybolovstvo notes that about five to six tons are exported.

But the Russian people eat much more caviar than what domestic producers sell. Why? Because more than 50% of the market, according to Rosrybolovstvo, consists of black caviar, imported from China to our country.

- About 140 to 150 Chinese companies are certified by the Rosselkhoznadzor for importing black caviar into our country. And there are no more than 20 Russian companies producing caviar for the market. At the same time, Chinese entrepreneurs do not allow our veterinarians and experts to visit their facilities, which means that we cannot know for sure what kind of caviar they sell us, - says Alexander Novikov, President of the Union of Russian Sturgeon Breeders.

Chinese caviar is produced in environmentally disadvantaged regions of the country. In addition, Novikov said, almost 100% of genetically modified feed is used for fish farming, so the sturgeons grow faster and entrepreneurs can save money. Instead of fishmeal, Chinese producers buy meat and bone meal from cattle or feather meal from poultry and add antibiotics; instead of fish oil, they use rapeseed oil, which is obtained from genetically modified rapeseed, or used vegetable oil from restaurants and canteens, on which the food has already been fried. According to the agency, five Chinese companies are currently licensed to supply sturgeon caviar to the Russian Federation.

Products entering the Russian Federation are controlled in accordance with the Food Quality and Safety Monitoring Plan. In case of initial detection of non-compliance in products imported from any country, including China, the Rosselkhoznadzor, in accordance with Decision No. 94 of the Council of the Eurasian Economic Commission of October 9, 2014 "On the Regulation on a uniform procedure for joint inspection of facilities and sampling of goods (products) subject to veterinary control (supervision)".

If the violation is repeated, a decision is taken to restrict the import of products of the company concerned", said the press service of Rosselkhoznadzor to our colleagues of the Laif. Last year, no banned or harmful substances were found in sturgeon caviar imported from China to Russia. This year, no shipments of black caviar from China to Russia were made. Russian entrepreneurs buy the caviar in the Celestial Empire, repackage it in branded jars marked "Made in Astrakhan" or "Made in Russia" and sell it at triple the price. For comparison: the purchase price of one kilogram of black caviar from China is less than $200 (less than 15,000 rubles), while in Russia the same amount of product costs between 36,000 and 40,000 rubles.

Entrepreneurs don't want to start growing, waiting for spawning and salted caviar. What for? If they can buy it ready-made and put it in nice packages. Businessmen claim that they are not breaking the law in any way, since they buy the raw material in China and the production of a product such as marinated black caviar is located in Russia.

- This is a lie. If the caviar is not salted immediately, it spoils on its way from China to Russia. It arrives in our country when it is ready," explains Alexander Novikov. - Domestic entrepreneurs falsify the product itself and related documents, making Chinese caviar look like Russian caviar. They have small farms where sturgeon grows to divert attention. But most of the volume comes from China.

In Astrakhan, according to experts, three out of every two jars of black caviar are counterfeit, having nothing to do with Astrakhan's production. Tourists, locals and consumers from other regions, hoping to buy real delicacies, usually take imported goods of unknown origin + Vasily Sokolov says: the most frustrating thing is to meet "China" in Astrakhan, where black caviar - the brand of the region. The deputy director of Rosrybolovstvo says that Chinese caviar has the right to exist, but the consumer must know what he is buying and what he is eating. Unfortunately, fraud works - the buyer is deceived. This negatively affects the market, the health of citizens and the image of Russian caviar.

Dust in the eyes - caviar for sale+.

One of the largest producers of Astrakhan black caviar - the brand "Astrakhan delicacies" - refused to comment on the presence of Chinese caviar on the market, noting that we can come to their farm, walk around the store, but the company representative will not give interviews. + The representative of a younger brand, the A-Ikra company, agreed to meet Life. Yaroslav Viktorov, the director of the company, said that there are two small fish cages in the Astrakhan region and another farm in Iran. Every year, according to Viktorov, the company produces five to six tons of black caviar, the company's turnover in 2019 - 100 million rubles.

According to the director of A-Ikra, his company does not do business in "China". On the contrary, it advocates fair domestic production.

What kind of caviar do cosmonauts eat?

Yaroslav Viktorov stated that A-Ikra is in talks with Roscosmos to supply its black caviar to the ISS, because at the end of 2019 the media reported a news item: the astronauts were left without a treat for the New Year - the reasons were not specified. - The problem was that the caviar sent to the cosmonauts was not tasty. We developed our own recipe for black caviar and sent it to Roscosmos in tubes. We recently received an answer: we are satisfied with the quality of the product, but the packaging has to be different. We are in the process of finalizing the packaging, and I hope that we will soon be able to start cooperating, so that every cosmonaut can have a jar of caviar for the New Year, - says Yaroslav Viktorov. Alexander Novikov, President of the Union of Sturgeon Breeders and owner of the "Russian Caviar House", says that all this is just a newspaper duck. The "Russky Ikorny Dom" has been cooperating with "Roscosmos" for several years and supplying caviar to cosmonauts. The last delivery took place in March 2020. In only one year, three shipments of black caviar go to the ISS +

- If I told you that tomorrow I'm going to marry some of the most beautiful actresses in Hollywood, would you believe me? No. Because I have no proof. It's the same thing here. You can say whatever you want. We have cooperated, we are cooperating and we will hopefully cooperate with our cosmonauts, - added Novikov. To prove his claims, he sent his colleagues the invoice from one of the companies, which is part of the "Russian Caviar House", concerning the shipment of caviar to "Roscosmos".

The Institute of Medical and Biological Problems, which deals with the nutrition of cosmonauts, did not comment on "Life".+ So how to choose caviar so as not to encounter a fake one? + Rosrybolovstvo and Roskachestvo know reliable caviar producers in Russia. But they cannot publish the list of bona fide businessmen - it is a violation of antitrust laws.+ So to avoid coming across a Chinese product, Vasily Sokolov recommends to study the label carefully.+ - According to the technical regulations on each box must specify: species, place of production, aquaculture. If this is not the case, you are most likely confronted with an adulterated product. If it says 'sturgeon' on the can, it's not right, it doesn't comply with the rules," Sokolov said. Alexander Novikov compares the choice of black caviar to that of wine, which is very expensive. After all, before buying, for example, a collectible drink, you are likely to look for information about it, read about the manufacturer and production.

The same should be true for caviar. This delicacy is very valuable, so don't buy it without thinking.